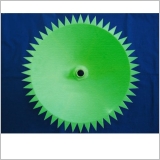 I. Product structure and specifications

Service area: Installed in push-flow and fully mixed aeration tanks, each serving area is 0.8-1.5m2. Oxygenation efficiency: When the water depth is 4m, the oxygen transfer efficiency η = -8-9%, and the oxygenation capacity is 0.3- 0.41 (kg · oxygen / hour.)

It can be seen from the foregoing that the factors affecting the oxygen transfer rate are mainly: flocculation of the aerated water body, enterprise mixing, bubble diameter, air volume, and partial pressure of oxygen in the liquid phase, etc.

The oxygenation of Φ600 diffuse aerator mainly depends on the following functions:

1. Vigorous mixing of liquid gas is transported from the pipeline to the aerator. It passes through the inner hole of Φ25 and passes through the sawtooth cloth air head for the first time cutting as water vapor. After passing through the diffuser hood and cutting the peripheral serrations again, it drives the surrounding stationary water body to rise, and the gas-liquid mixing is caused by the energy difference. In addition, the aerator is distributed to the bottom of the pool. The convection of the water flow increases the gas-liquid mixing and accelerates the renewal of the water film at the gas-liquid interface.

2. After twice sawtooth cutting and gas-liquid mixing, the diameter of the bubble becomes smaller, which increases the gas-liquid contact area and facilitates the transfer of oxygen.

3. Diffusion effect of the diffuser hood The diffuser hood diffuses several bundles of gas into a cylindrical shape, which changes the gas distribution state at the bottom of the pool, increases the area of gas distribution, and intensifies the diffusion of bubbles at the bottom and the Gas-liquid mixing is more conducive to aeration and oxygenation.
The difference between the oxygenation of the diffuser aerator and the Jinshan Type I lies in the secondary cutting and dispersion of the airflow, which increases the air distribution range. Changed the flow pattern in the pool. The difference from the fixed spiral is that the height of the equipment is greatly reduced, and the gas distribution range is large. The bottom has a large mixing effect, so it has better oxygenation performance.